A variety of small diesel engines have been fitted in Flicka sailboats. The most common is the Yanmar 1gm 10. This is a single cylinder engine with a reputation for durability and reliability. Other Flickas have been powered by Vetus, BMW, Beta and Ferryman. These engines are usually between 9 and 13 horse power.

The Yanmar 1gm 10 was the chosen engine for the Pacific Seacraft Flickas and the original engines are still running in many of these boats. It's not uncommon for a well maintained 30 year old 1gm to still be puttering away happily down below.

Yanmar has a huge global network and parts are readily available in most ports. The Yanmar 1gm 10 is very simple and can be repaired and maintained by any careful amateur. More about the Yanmar 1gm 10. 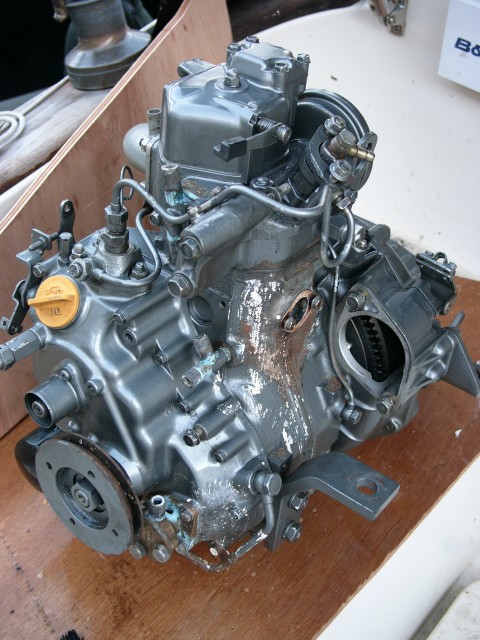 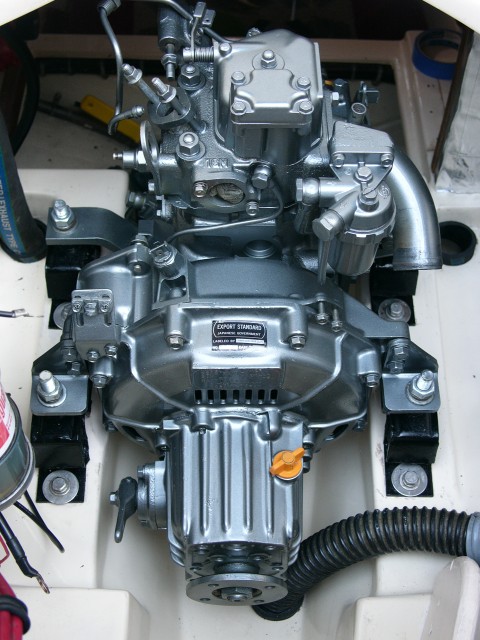 Improving the Yanmar 1gm 10 engine Installation or using an alternative

Flicka owners have made various improvements to their inboard installations such as fitting advanced alternator management systems, sound proofing and flexible couplings. Several Flicka owners now have feathering or folding propellors. One forward-thinking Flicka owner has even installed an electric motor in his boat, providing simple, clean and quiet motoring.

The Yanmar 1gm has been around since the late 1970's and is still available almost unchanged in design. The 1gm was modified slighty and became the 1gm 10 with a slightly larger fly wheel for more power. But the dimensions are almost the same.

Recently this engine has received some serious competition with the introduction of smoother and quieter 2 cylinder models of similar size. The new two cylinder Nanni 2.10 has been designed as a drop-in replacement for the 1gm 10. There are also several other engines on the market that would be a good alternative. These are in the 10 to 14hp range from Beta and Vetus and are Kubota and Mitsubishi based. However, the Yanmar 1gm 10 is still the smallest and lightest available.

The Nanni 2.10 looks like a really good alternative because, according to Nanni, it's a direct replacement for the 1gm 10. It's smoother and quieter and it's max revs are 3000 rpm. So it will reach hull speed at much lower revs leading to quieter motoring. It's heavier than the Yanmar but Nanni have made the dimensions almost identical, even the feet. In theory you can take out your old engine and stick this one straight in. If only it were that simple! Nagging doubts persist such as: Is the exhaust on the same side? Will it take my existing Balmar alternator.? Clearly, more research is needed here.

The Beta engines are 10 and 14 horse power and like the Nanni's are Kubota based. These are assembled in the UK. Beta will supply with Balmar alternators and regulators fitted and they also provide optional engine mounted oil pumps.

I like the customer testimonial on the Beta US web site. It says "what a concept, it is engineered to be serviced easily!". Well that would make a change..

The advantages of the 1gm 10

The disadvantages of this engine are for me as follows.

Reasons why you might want to consider NOT buying from Yanmar.