An Improved Bowsprit for Flicka Caraway 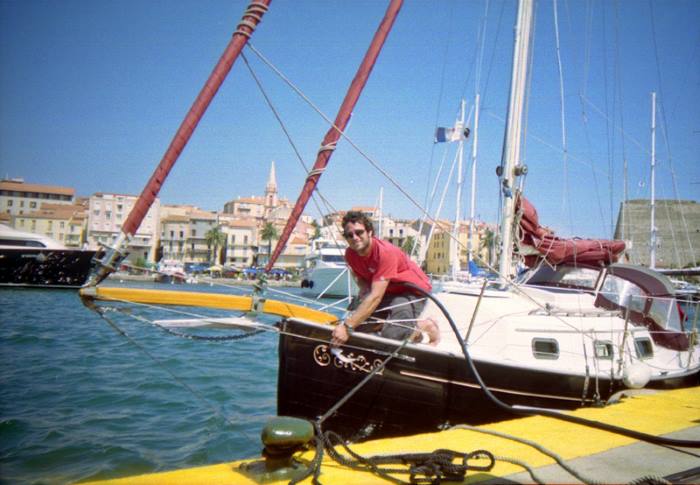 Caraway on the fuel pontoon in Calvi with her custom Oregon pine bowsprit. Note the Fortress anchor secured in a special fitting underneath. 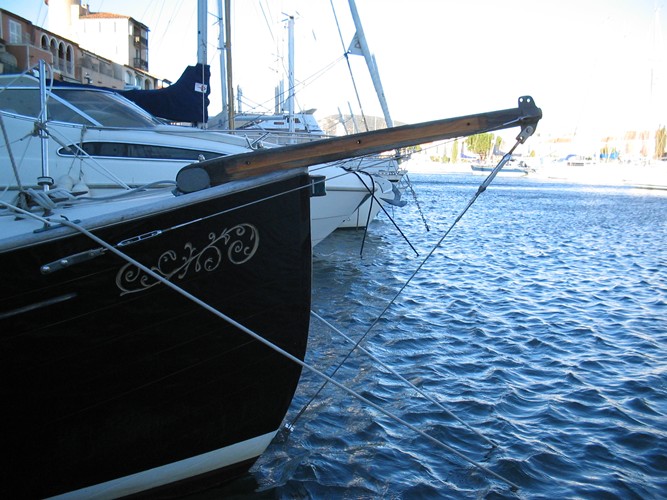 The original Pacific Seacraft Flicka sailboat bowsprit is a rugged unit made from two or three pieces of Douglas Fir laminated with epoxy. It's completely straight and has a heavy teak platform with anchor rollers bolted to the sides. A pullpit is bolted to the teak platform to make headsail changes easier and more secure.

The old bowsprit had been neglected by the previous owner and was due for repair or replacement. Hidden by the teak platform it was difficult to varnish and even harder to inspect properly. The only solution was to strip it down and take a good look.

On closer inspection the Douglas Fir was in pretty good shape considering the neglect and could have been repaired but in discussions with my sailing mentor Benjy we decided to consider a completely new sprit with some serious improvements.

After much discussion and fretting on my part we decided to do away with the old sprit and teak platform and make a new and longer bowsprit with a slight downward curve. Something closer to what may have been found on the gaff rigged boats from whence she came. I never liked the way the genoa sat on the pulpit and its high cut wasn't helping Caraway. She tended to heal badly.

The best wood we could find in France for the job was Oregon pine. Or so they called it. It's a nice wood with a lovely colour and grain. It's pretty hard but not too difficult to work with sharp tools. I had been told that wood-working blades should be sharp enough to shave with. I set out to get them that sharp! 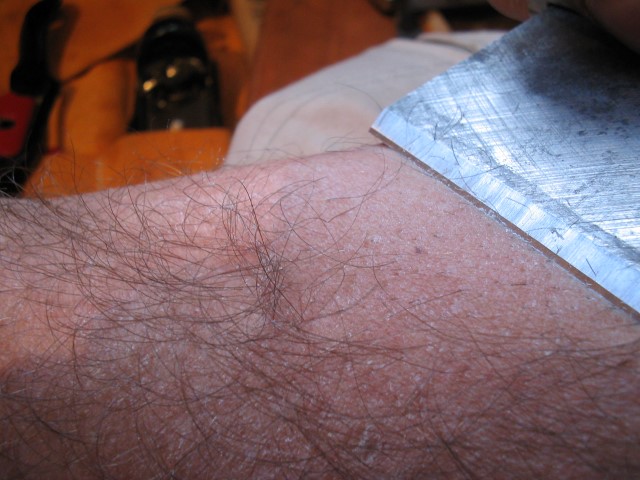 So, we bought the wood, glued it together with epoxy, shaped it and stuck it on! Simple eh! 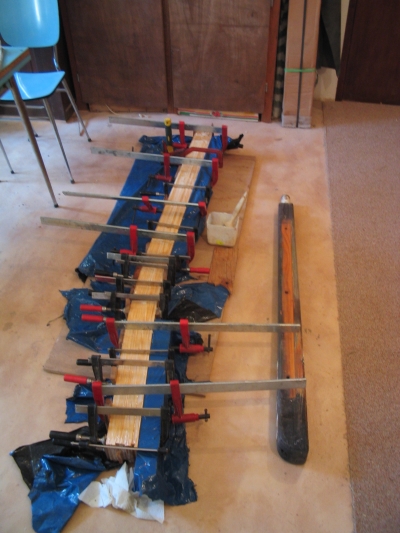 In fact, it took me a week to decide on the shape, using plastic drainpipe bent down with the bob stay. A week to find and order the wood. An hour to make the jig and a couple of hours to prepare the wood, first choosing the grain on top, sanding the glued faces across the grain and then clamping the lot together.

That was the easy bit. Once dry i used an electric plane to remove the excess epoxy and then planed the bowsprit to shape. This took forever because we decided on a square-section, tapered form with bevelled edges. A rounded sprit would have been lovely but have you ever tried walking on a round bow sprit? 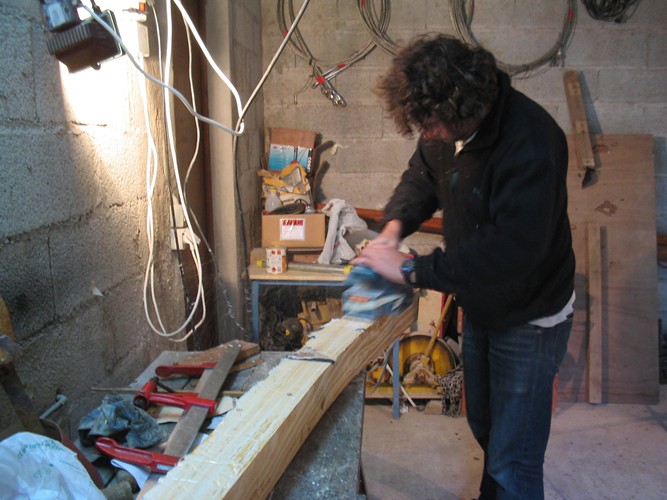 Shaping required careful measurement, marking and shaping with a plane and spoke shave. The final rounded tip to accept the eye band was done by Benjy. I didn't want to mess up having got this far! He did this with a chisel after marking a circle on the end. We used the old bow sprit for the diameter of the end piece to ensure it would
fit the bronze eye band. 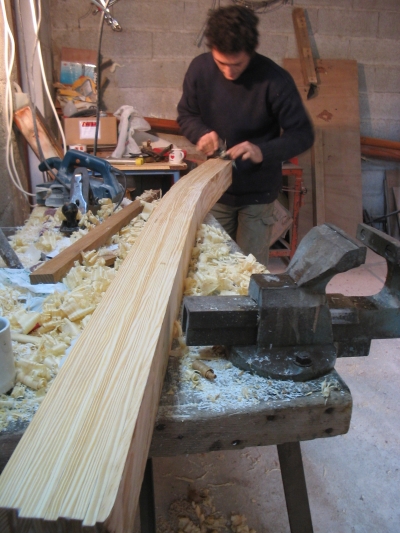 It took a week to shape and finish to our satisfaction. A dry fit was essential to check we'd got our measurements right. Finally, it was ready to varnish. This had to be done immediately to protect the wood and the finish. 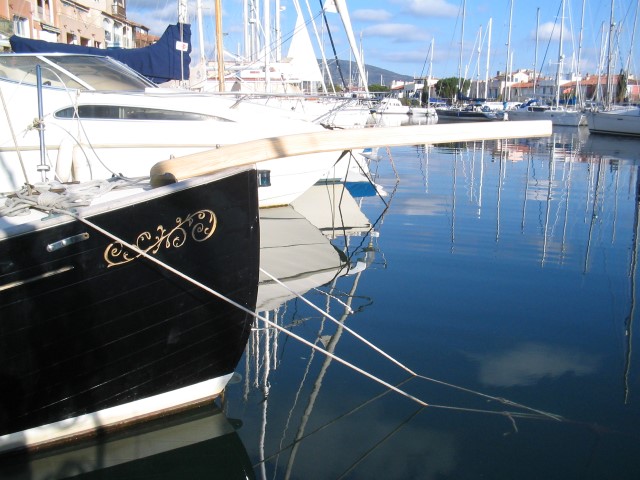 Varnishing is an art; one that I soon found I was yet to master. 13 coats and much cursing later she (the bowsprit) could go on. I'd add more varnish later but for now I needed to measure up for the new fore-stay and get the extension for the Schaeffer Furler on order. I also needed to go and get horribly drunk to congratulate myself.

The fore-stay was now about 18 inches longer. So I had to get on with things if I wanted to go sailing some time that year at least. 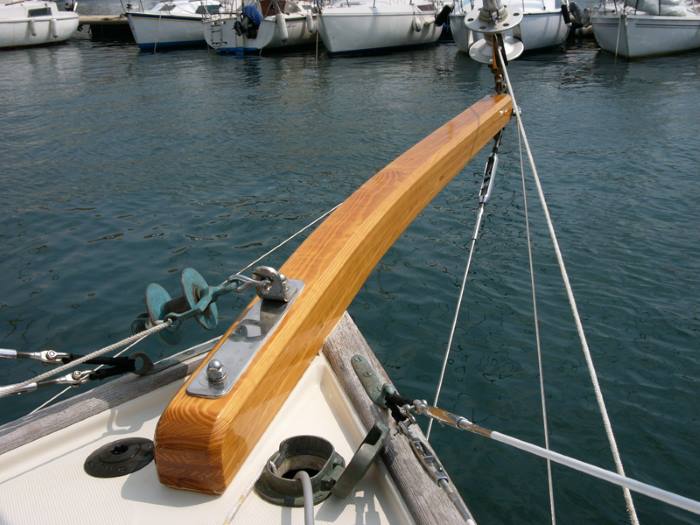 Finally, all fitted up with new whisker stays, lifelines running to new bronze rings on the capping she looked great. A new genoa, with a lower cut finished her off. Some months later of course... living in France has its drawbacks which include waiting a long time for anything.

The next project was to design a roller system for anchoring since I'd lost the old one with the teak platform.

I'm delighted with the new sprit. Not as easy to change the headsail but a much bigger sail area and slot for the staysail have improved her perfermance hugely. I now pole out the large genoa when running and she goes a treat. 6 knots is common running in Caraway. 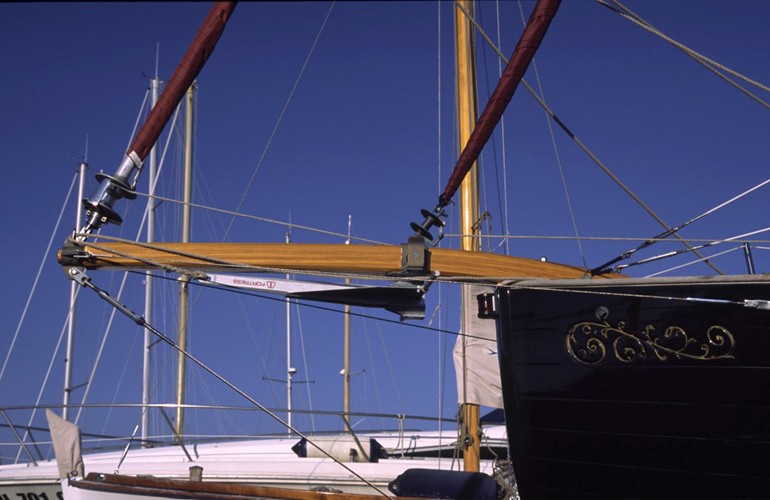 Note the Fortress anchor that hangs under the bowsprit in a special slot designed for the purpose. This idea was conceived by Robin Benjamin and contructed by Classic Marine in the UK.